Paul is back in Harmony 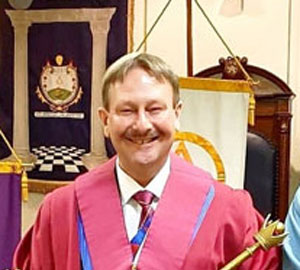 Unfortunately, Paul having suffered a health setback, was unable to be present at the chapter installation in March 2019, attended by his close friend and his predecessor as Provincial Grand Director of Ceremonies, Ian Higham, the Second Provincial Grand Principal.

With more time to recover and with lots of love, care and attention from those close to him, Paul has made remarkable progress on his way to a full recovery. So much so he was able to be in the chapter at the September 2019 meeting and was duly installed as first principal by David Shaw, who had graciously continued in office since March.

Other commitments prevented the Second Provincial Grand Principal from being present for Paul’s installation which allowed the Wigan Group Chairman, Geoffrey Porter, the privilege of bringing the greetings of the Grand Superintendent. He was delighted that Paul had now recovered enough to be able to be present and he wished him well for a sure and steady progress to full health once more. He thanked David Shaw for his work in installing Paul, Alex Humphrey for standing in as second principal. He wished the principals and all the companions well and was sure that the chapter was in for another good year.

At the festive board Paul’s response was warmly received by all those present who were pleased to see him as their leader once again.