We remember at Wigan and Hindley

On a frosty but brilliantly sunny autumnal morning, people across the nation were gathered to remember those who paid the ultimate sacrifice so that we have the freedom that we enjoy today. Amongst those paying their respects were Freemasons from the Wigan, Hindley and Pemberton who were there to represent the members of lodges and chapters that meet within the group.

They were proud to be part of their local community gathering, ensuring that Freemasonry was well represented at the Remembrance Day Parade at the cenotaph in the grounds of St Peter’s Church in Hindley town centre and at the monument in Wigan.

Several Masons from other Masonic Orders were also in attendance. In Wigan, the honour of laying the wreath fell to the members of Orrell Lodge No 8371, led by the WM Derek Ishmael, accompanied by Ernie Barrow, Derek Todd, Peter Wogan and James Wheeldon, with Terry Dickinson representing the Mark degree.

The parade halts for the service at the Cenotaph in Hindley.

Not far away at Hindley Masonic Hall, an early gathering for coffee and biscuits was the order of the day before making their way over the road to the market square to join the those assembling for the parade. The party consisted of Keith Woodhall, Stan Fairhurst, Brian McMullen, Ray Pye, Eric Bailey, Peter Newell, Chris Alexander and his wife Lisa.

It fell to Peter Newell, one of the two military veterans in the Masonic party to liaise with the Company Sergeant Major running the parade, to ensure that they were in the right place and that the wreath laying would go as smoothly as possible.

The parade progressed to the beat of the marching band and eventually came to a halt in the central crossroads opposite the Cenotaph at St Peter’s Church where the service was conducted. It was a delight for the Masonic party to see so many people gathered to join in the service and pay their respects. 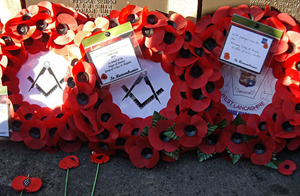 The wreaths on the Cenotaph in Wigan.

It was a beautifully conducted service of remembrance which began with hymns and prayers, and this was followed by the laying of the wreaths around the Cenotaph. The honour of laying the Masonic wreath went to military veterans Peter and Chris, who performed their duty with style.

After the laying of the wreaths, the last post was sounded and a two minutes silence was immaculately observed. This was followed by the reveille and final prayer before a resounding two verses of God Save the Queen echoed around the streets of Hindley. What a way to finish a truly memorable morning. We will remember them. 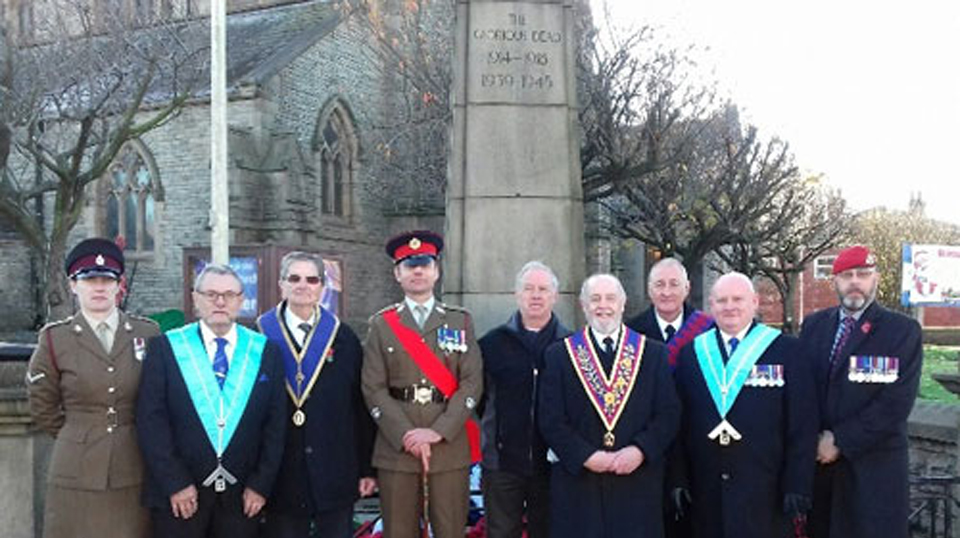