Another fair cop for Prodesse

It was unfortunate that, due to family illness, the WM of Prodesse Lodge No 8678, Paul Joynson, could not attend its installation meeting to install his successor. He was really disappointed that circumstances had conspired against him and sent a letter of explanation to be read at the appropriate time thanking the brethren of the lodge for their support throughout the year. Paul is a policeman, and would have been delighted to install Don Atkinson, himself a retired policeman, in his place. 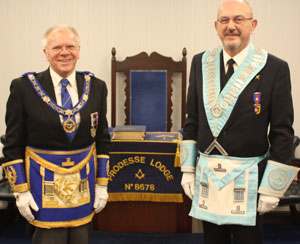 Don started his police career walking the beat in Droylsden, Manchester, moving on to serve in the Lancashire Police HQ in Preston before joining the traffic unit in Liverpool. A transfer to the motorway unit at Lancaster followed, and an incident that led to his receipt of Lancashire Police’s highest reward for courageous conduct.

One spring day after working an early shift Don returned to the police post, two men in mini car drove to the post asking for directions. Don spoke to the driver and became suspicious and asked him to come into the station. At which point the driver started the engine and began to drive off. In his bare feet Don clung to the vehicle and was driven about a mile down the road with the driver trying to force him off by swerving towards oncoming traffic. The mini eventually swerved up onto a grass verge where Don managed to reach inside and turn off the engine. Both men were arrested from the stolen car and the driver charged with his attempted murder.

Don moved on to train as a firearms officer, eventually becoming an instructor, specialising in VIP protection training, and trained national and international students and worked with the RUC in Northern Ireland. On retirement from the force, Don became a claims investigator for a large firm of solicitors in Bolton, and was happy to be amongst 14 other retired police officers from various forces in the Northwest, investigating industrial injury claims and traffic incidents including the tragic case of 33 Chinese immigrants found dead in a lorry at Dover. A very interesting career. 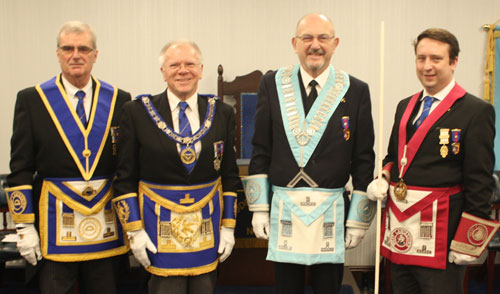 The principal guest was APrGM Derek Parkinson, attending Hindley Masonic Hall on what was to be his last visit to the Wigan Group before he retires from office in April. He was supported by PrGStwd Phil Barr and Wigan Group Vice Chairman John Selley. They, along with all present, were treated to an excellent ceremony. DC Ken Wilson left his duties and stepped in as installing master and delivered a great performance assisted by members of the lodge. Don confidently took the chair.

Jack Lyon, who has the honour of being the first initiate into Prodesse Lodge, gave the address to the new WM, Eric Draper, a founder, to the wardens, while Derek Parkinson performed his duty well in delivering the address to the brethren of the lodge. The working tools were presented in excellent fashion by junior members of the lodge, Alex Goulden, Ben Murray and Ryan Magnall.

On congratulating the WM, installing master and all the officers who took part, Derek was delighted to bring the greetings of the Provincial Grand Master, who would have been really impressed by the work carried out. He was also pleased to receive charitable donations to the sum of £775. In favour of the Masonic Charitable Foundation (£375) and Hindley Masonic Hall (£400), which is a commendable effort from such a small lodge.

A fine festive board followed in the normal friendly and lively atmosphere at Hindley Masonic Hall. David Goulden sang the master’s song, accompanied by Karl Greenall.

Don is an experienced Mason whose involvement spans over 40 years when he was initiated into Scorton Lodge No 5791 in 1978. He was WM of Pilling Lodge No7879 in 2008 and brings both experience and enthusiasm to his new Masonic home. Sounds like another fair cop for Prodesse.